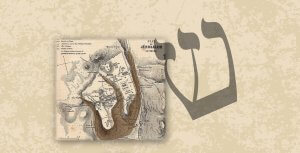 We learned in our last article that God has the "Title Deed" to Jerusalem and has scribed His signature, the Hebrew letter Sheen, into the three valleys that surround Jerusalem.

The three valleys that form the three fingers of the Sheen all have one single place of origin.  That place is Mount Moriah.

Mount Moriah is where Yeshua Ha-Mashiach was crucified on a rude wooden cross.

We have read the prophecy found in Zechariah 12:1-2:

Behold, I will make Jerusalem a cup of trembling unto all the people round about, when they shall be in the siege both against Judah and against Jerusalem.

Biblical Prophecy teachers are well aware of this verse and its implications for the last days.

The question is "What happens next"?  What happens after all the nations of the world find themselves obsessed with the status of Jerusalem?

The answer is the Second Coming of Christ to set up His millennial reign on earth.

To be clear and to avoid confusion, you need to understand that the prophecy of Zechariah has two parts.

Part One is the general overlay of the conditions regarding the status of Jerusalem before, during and at the conclusion of the day of the Lord.

How long is this period of time?

While no one knows for sure, we can pinpoint the period of time when the prophecy of Zechariah began to unfold with some degree of confidence.

Zechariah's prophecy began to be fulfilled on June 10th 1967, at the conclusion of what Israel calls The Six Day War and what the Arab nation called The Setback.

This was not the first but rather the third war that Israel has had with its Arab neighbors since Israel’s rebirth in 1948.

What makes this war unique is that in this war Israel doubled its territory seizing the West Bank, the Golan Heights, the Sinai Peninsula and most importantly East Jerusalem.

I don’t remember reading any headlines in 1967 that announced that Zechariah's 2500-year-old prophecy had begun to unfold and was literally being fulfilled literally in the ancient land of Israel.

The fact that the world is biblically illiterate does not change the fact that the Bible predicted what would happen before it happened, proving once again that God and only one knows the beginning from the end.

Consider with me the prophecy of Zechariah 12:3:

And in that day will I make Jerusalem a burdensome stone for all people: all that burden themselves with it shall be cut in pieces, though all the people of the earth be gathered together against it.

The literal Hebrew interpretation of the Burdensome Stone is both obvious and a play on words.

The literal Hebrew interpretation of the phrase burdensome stone is a lading stone.

The literal Hebrew says that anyone that burdens themselves with the lading stone will be lacerated.

Obviously, no one is going to try and literally lift up Jerusalem.

So why does God compare it to a lading stone?

The basic idea is that of moving something heavy from one place to another.

There is another idea encapsulated into the word lading and that is contained in the concept of a Bill of Lading. A bill of lading is a receipt that gives the ones moving goods from one place to another the legal authority to do so in the form of an invoice, receipt or title.

This allows them to move goods from one place to another legally and lawfully.

What is the Lord trying to communicate through His prophet Zechariah?

The idea is rather simple when you think about it.  It is a concept that matches the facts on the ground precisely, the very thing that has begun to happen in our lifetime regarding Jerusalem.

The burdensome stone or the lading stone that will lacerate everyone that tries to move it is a reference to the ownership, the title and the moving of the boundaries of Jerusalem. This would include the idea of removing or subtracting by the process of dividing Jerusalem as if to scoop out liquid with a ladle, thus employing another meaning of the root word laden.

It is as if the entire world is arguing about the rightful owner of a piece of property as if the title has been lost and no one really can be sure who owns it.

And what does God warn will happen to all those that get involved in mediating the transfer or removal of any part of Jerusalem?

They will be lacerated.

The Burdensome Stone is a Lacerating Lading Stone.

Have we already witnessed the fulfillment of this prophecy or is it future?

The answer is yes to both questions.
Let’s consider the past fulfillment.

Three countries invaded Israel on June 5th, 1967 and by June 10th of the very same year all three countries had not only lost the war but each also lost territory.

Syria’s laceration came in the form of losing the Golan Heights.

Egypt’s laceration came in the form of losing the Sinai.

Jordan’s laceration came in the form of losing the West Bank and East Jerusalem.

Isn’t this exactly what the prophet Zechariah prophesied?

Has the prophecy now been completely fulfilled?

The prophecy regarding the struggle over the boundaries and title deed to Jerusalem rages on to this day.

Fifty years later, in 2017, Jerusalem is prominently in the news as the entire world is intoxicated and obsessed with the fate and status of Jerusalem. 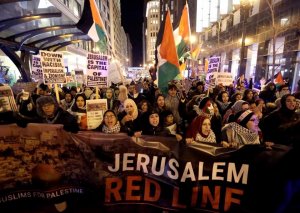 The world is demanding that they are the ones that will decide the fate of Jerusalem, not Israel and certainly not God.So, we ask again, who owns Jerusalem?

Is it the property of the Palestinians?

Or is it the property of Israel?

Is it the international property of the entire world as a place where the three great religions where Jews, Christians and Moslems will one day worship in peace and harmony?

The answer to this question will not be found in the declarations, decrees and legal mandates announced by the capitals of this world, the United Nations, or public opinion.

The answer is found in the Bible.

God owns it and has put His signature around it!

And while some may not like the idea, the fact is that God has given it as an everlasting inheritance to the Children of Israel.

He did not give it to the Arabs and He certainly didn’t promise it to the church.

Nothing could be further from the truth.

The most prominent prophecies in the Bible don’t have anything to do with land, they have to do with the Messiah.

From beginning to end, the central theme of the Scriptures is the Son of God, the Prince of Heaven who came to earth and took on flesh and blood in order to provide the blood atonement that accomplished man’s redemption. The central figure in all the Scriptures is Yeshua Ha-Mashiach, the Messiah.

That does not change the fact that God has made an everlasting covenant; promises to the Children of Israel in the flesh regarding the land of Israel.

These unconditional promises have only been partially fulfilled.

Are we living in the terminal generation that will see the final fulfillment of God’s promises as it regards Israel?

There are over 170 references in the Ancient Prophetic text to the land that God gave the physical offspring of Abraham, Isaac and Jacob.

The Bible records in 55 prophetic passages that God promised the land of Canaan to the Jews as an Unconditional Covenant.

On 12 occasions, God confirmed with a sacred oath that this unconditional covenant was Everlasting.

Here are just a few examples:

All the land that you see I will give to you and your offspring forever.

The whole land of Canaan, where you are now an alien, I will give as an everlasting possession to you and your descendants after you; and I will be their God.

Jacob said to Joseph, God Almighty … said to me … I will give this land as an everlasting possession to your descendants after you.

You can turn all these promises into ALLEGORICAL clap trap changing the character of God from one who literally keeps his covenants and promises to someone who changes them from literal to allegorical half way their fulfillment.

Or you can take the bible literally and admit that God may actually be able to do things at the same time.

God has made promises to physical Israel that are yet to be realized.

God has made promises to the Church that are yet to be realized.

We worship and adore a God that keeps His promises in His own perfect time. He is a covenant keeping God that will not ever break His Word and does not need help from those that want to sweep hundreds of promises God made to Israel into the allegorical dustbin and then present them to Christians as their birthright.

Thousands of Christians have lived their lives believing the promises of God without seeing any evidence that their fulfillment is even on the near horizon.

What an irony that the one generation, the last generation that is seeing the fulfillment of ancient prophecies as they relate to Israel are mocking and scoffing, ranting and raving about those that believe the Scriptures, take God’s Word literally, see the signs of the times and are looking up with a certain Blessed hope that our Salvation draweth Nigh.

Let God be true and every man a liar.

Like this article? Vote!
29 Votes
Click stars to vote
I'm finding this book to be greatly helpful in understanding how a word can be understood from the story value of each letter
James P