In Part 1 of our investigation into the meaning of Faithful, we connected two puzzle pieces together.  We can now see the direct connection between Manna, the bread that came down from Heaven, and the last two letters in the Hebrew Word Faithful.

The Connection is Clear!

Notice that the last two letters in the word Faithful are the two letters Mem Noon, the Word for Manna.

The Mystery of the Pictorial Translation of
Manna and Faithful

Look carefully at the words of the Messiah as recorded by the Apostle John:

John 6:32
Then Jesus said unto them, Verily, verily, I say unto you, Moses gave you not that bread from heaven; but my Father

giveth you the true bread from heaven.
For the bread of God is he which cometh down from heaven

Put the puzzle pieces together and what do you get?

Messiah solves the mystery for us. We do not need to guess the meaning to the hidden puzzle pieces we are meant to discover when we read the first mention of Faithful.

The Manna that first dropped to earth from Heaven was given a name that would one day open the door of understanding to a mystery that is hidden no more.

The true Manna comes from Heaven and He has many names.  He is the Anointed One, The Spotless Lamb of God, Immanuel, and He is also called Faithful and True.

Messiah’s Name is Faithful and True

Revelation 19:11a
And I saw heaven opened, and behold a white horse; and he that sat upon him was called Faithful and True,

Revelation 3:14
And unto the angel of the church of the Laodiceans write; These things saith the Amen, the faithful and true witness, the beginning of the creation of God;

And how do you suppose the Hebrew word Amen is spelled?

There is a principle applied to the interpretation of the Scriptures that is called the "Law of First Mention."

The first mention of a word in Scripture takes on special significance as it discloses God’s primary intended meaning of the theme that needs to be considered as a primary witness whenever the word subsequently occurs in the Scripture.

We learned that apparently, the first use of the Hebrew word faithful occurred in:

Numbers 12:7
My servant Moses is not so, who is FAITHFUL in all mine house.

First Mention a Shadow of One to Come!
According to Moses

We have learned that this first use of the Hebrew word Faithful had another One who was even more faithful than Moses in view.

Moses prophecies in Deuteronomy 18:15 that God is going to raise up another prophet who is greater than himself who the children of Israel should listen to:

Deuteronomy 18:15
The Lord thy God will raise up unto thee a Prophet from the midst of thee, of thy brethren, like unto me; unto him ye shall hearken;

Shadow is revealed by Apostle Paul to be Yeshua Ha-Maschiach

The Apostle Paul tells us who that Prophet is in Hebrews 3:1-5.
Who is he?
He is Yeshua Ha-Mashiach, Jesus the Christ.

Wherefore, holy brethren, partakers of the heavenly calling, consider the Apostle and High Priest of our profession, Christ Jesus;
Who was faithful to him that appointed him, as also Moses was faithful in all his house.
3 For this man was counted worthy of more glory than Moses, inasmuch as he who hath builded the house hath more honour than the house.
For every house is builded by some man; but he that built all things is God.
And Moses verily was faithful in all his house, as a servant, for a testimony of those things which were to be spoken after;

Yeshua Reveals the true Meaning of the word Faithful 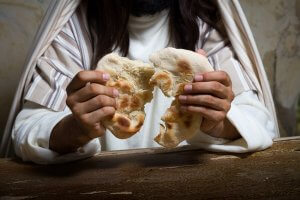 Then Jesus said unto them, Verily, verily, I say unto you, Moses gave you not that bread from heaven; but my Father

giveth you the true bread from heaven.
For the bread of God is he which cometh down from heaven

He is the one that the Heavenly Father sent down from Heaven to give us eternal life. Jesus is that Manna sent from the Father. Yeshua is the bread of life.

Yeshua Reveals that He is FAITHFUL!

The word FAITHFUL as a personal pronoun is used only once in the entire Scripture. ONLY ONCE!

It becomes by virtue of the hierarchy that is the principle in all languages including the Hebrew, Greek, and English language, that the First and Last Mention to which the other 100 mentions of FAITHFUL as an adjective or a noun are subordinate.  All others, that perform their duties with loyalty and constancy keep their promises and vows and are considered reliable and trustworthy, pale by comparison to our faithful Heavenly Father who sent His faithful Son to accomplish the deliverance and salvation of sinful man. In order that we do not miss the revelation, we discover in the last written revelation of the Scriptures that Yeshua Ha-Mashiach is also called by the name FAITHFUL, TRUE, and AMEN.

AMEN is found 28 times in the Old Testament

Psalm 89:52
Blessed be YHVH for evermore. Amen, and Amen.

How many times do you think the Hebrew word AMEN is found in the Greek and English translations of the New Testament?

Amazingly, it is founding 51 times in the New Testament.

What are we declaring every time you say AMEN at the end of a prayer?

Every time you end your prayer to your Heavenly Father with the word AMEN, you are proclaiming the fulfillment of the first prophecy ever given to mankind. You are declaring that God is faithful to keep His promise of a Redeemer.

The Promise of a Deliverer given to Eve after the Fall of Adam and the eviction from the Garden of Eden is celebrated by its fulfillment by Yeshua every single time you say AMEN.

What are we declaring every time you say AMEN after hearing the word of God preached or taught?

Every time your spirit prompts you to say AMEN after receiving the words of life into your heart and soul, you are proclaiming that our Faithful Heavenly Father sent His precious and only begotten Son from heaven to the earth in order to accomplish YOUR Salvation. Amen is the testimony that you have eternal life because Yeshua became FAITHFUL. The one name FAITHFUL and TRUE is only one sent from Heaven empowered to rescue man from the curse of death and sin and by the Faithful Spirit of God to give the free undeserved gift of Faith that guarantees eternal life.

Now you know the meaning of the word FAITHFUL!

Like this article? Vote!
29 Votes
Click stars to vote
I'm finding this book to be greatly helpful in understanding how a word can be understood from the story value of each letter
James P