Is there a hidden meaning in the pictures embedded just below the two Hebrew letters that spell the word Manna?  Let’s find out! 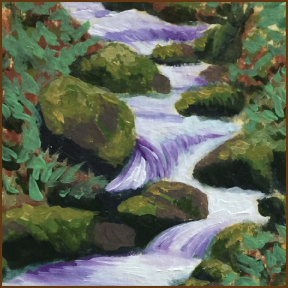 Massive as the waves of the Sea

The Word of God that brings Life

In the Conventional Hebrew

The answer is unexpected and puzzling until you begin to unlock the mystery of its meaning.  We would expect the Picture meaning of Manna to have some reference to Bread, but it doesn’t.  Why? The answer to this question can be found in context of the Chosen People's first encounter with Manna.

And in the morning the dew lay round about the host.​ And when the dew that lay was gone up, behold, upon the face of the wilderness there lay a small round thing, as small as the hoar frost on the ground.

Just in case there is any doubt about it, the Jews, who were on a quest for a lifetime subscription to the Messianic free lunch program, identified where they believed the Manna came from.  Take another look at John 6:21.

Our fathers did eat manna in the desert; as it is written, He gave them bread from heaven to eat.

Did the Jews think that Manna magically appeared on the earth?  No, it was their opinion that the Manna fell like rain from heaven.

Yeshua supports this idea as He declares that He is the true life that comes from heaven. He declares that He came down from above.The Big Idea with Manna was not primarily its substance but its origin.  The mystery was, “what was it?” There was little doubt about where it came from.

Did it fall like rain upon a people who were desperate for nourishment?  Was it the food of angels?  The Jews certainly thought so.  But even that majestic thought took second place to the idea that whatever it was, it came from heaven and fell like rain upon the hungry, wandering chosen people of God.

What are two major themes in the ministry of Yeshua Ha-Mashiach? We find the answer declared over and over again.  The answer is Water and Bread.

The huge crowds that followed Yeshua thinned to a small circle of disciples when Yeshua declared the following in John 6:53.

Then Jesus said unto them, Verily, verily, I say unto you, Except ye eat the flesh of the Son of man, and drink his blood, ye have no life in you.

And what was the context of this revelation?

The answer is MANNA.

The object lesson of the Manna from heaven was lost on the unbelieving Jews even after they had more than 1000 years to meditate upon its Messianic significance. Despite their spiritual deadness, Jesus was determined to put the solution to the mystery of the “What is it?” (Manna) on the record.

The Manna that first dropped to earth from Heaven was given a name that would one day open the door of understanding to a mystery that was hidden but is now revealed. Yeshua is the Manna from Heaven. He came unto His own and they asked “WHO IS HE?”.

One day all remaining Israel will know the answer to that question. That will be a glorious day indeed! In the meantime, those of us who have eaten the true Manna from heaven will continue to give testimony to the fact that eternal life can only be found in Yeshua Ha-Mashiach.

The Picture hidden in the two letters that compose the Hebrew word literally translated “What is it?” contains the answer to the question:

It is the Son of God come down from heaven to bring eternal life to those that put their faith and trust in Him, and Him alone. The miraculous Manna was no good to the hungry Jews who wandered in the wilderness unless they ate it. Isn’t that exactly the point Yeshua made regarding Himself in John 6:35?